I completed and published CRYSTAL BALL PERSUASION, on my birthday, September 18th – a story of a Gypsy who found herself at odds with her life and as a result, acted on a years old premonition as soon as it became possible. Here is an excerpt from the beginning of Chapter 4.

Why chapter 4, you may ask. Well, at the time of publishing, I had read and re-read the book so many times that I lost perspective. I didn’t have a good grasp of whether it was my best work or not. That happens often, I think, when the writer is too close. This past week, I decided to revisit the book and took note of a part I found was just what I expected of myself as a writer. It has my signature. Does that make me an egotist? No, I don’t think so. I think it makes me a realist. While not perfect, I deem Crystal Ball Persuasion ready for its readers! 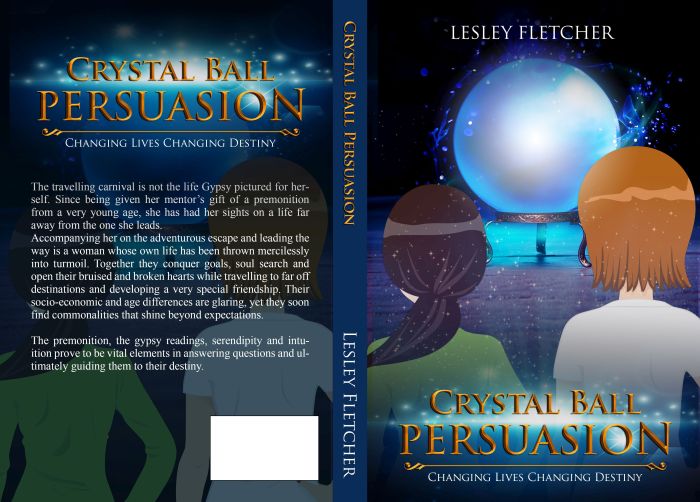 Gypsy felt the winds of change blowing, finally, and without much further delay. Providence spoke a thousand languages to her urging her to keep things in check; to carry on with her plan, to leave her current life and build a new one and to finally get answers to mysteries that plagued her very being. The anticipation gave her courage and strength. The idea and mere taste of freedom lent her aspirations.

The mystery of it all was not lost to her as she was fully aware that there was no end in her sights at the moment. All she knew is she had to move in the direction of her destiny, with or without Jules right now. She felt certain that Jules lent the wisdom of an ally to help see her own plan to completion or at the very least to a new beginning. Either way, Gypsy knew her part was not over, but rather just starting. If Fae had seen travel in colors then it was sure to happen. As much as she and Fae did not see things the same way, there were some things that professionally speaking, she respected. The biggest being that whenever she mentioned colors, it meant she was channeling and with channeling, came truth by way of visions.

Tonight she would begin the quest to obtain a passport, birth certificate and a driver’s license bearing her new name. She had known for a long time what the name would be. When she was about five years old there was a beautiful little girl that came to the fair. The girl was everything Gypsy was not. She had corn flower blue eyes with curly blonde hair that bounced when she walked. Her dress was soft pink, puffing out with a crinoline underneath and tied at the back in a bow with long tails. The shoes were shiny white which matched her tiny purse. Her mother had come for a reading with Ingrina. She and the girl sat quietly in the corner of the tent; the girl being given a huge pillow to sit on, while Gypsy sat on the floor. Her name was Mia Gabriel and soon Gypsy would steal her name as sure as Mia had stolen a piece of Gypsy’s innocence that day. Finding out that she would never look like or have what that girl had gripped her young heart and given it a shake. As an adult, the feeling of the impossible dream still had an effect, though she now considered it an improbability instead of impossibility. As an adult and especially today, she held hope for a future outside her current realm.

Getting a passport and other identification could only be achieved through one person. Young Gervais. Gervais; the one man she loathed to be near. The one that was with Bobby when the gun went off causing his death. The one that had competed with Bobby in every way, especially for her attention and affection. The one that lost the battle to win her over and the one who was once Bobby’s best friend and bunk mate. He was also the one guy her Pa, Ma and Ingrina insisted she not hang out alone with and the one guy her sister was in love with. He was her friend too, for years, but she was warned within an inch of her life to never be with him unaccompanied. He was the spawn of the devil, they said. He was the son of the leader of the carnie gypsies and now with his father’s passing three months ago, he had inherited the role. The most powerful man of the fair circuit held her future in his hands. The price she would have to pay was the only thing that had held her back from adopting an identity prior to now. The transaction had to be perfectly timed and executed; her preparation and documents in place so that she make her getaway without anyone catching on to her prior to her leaving. If anyone did suspect anything, her life or at the very least, her health, would be in danger. Gossip travelled like wildfire in her crowd.

She would have to play him just right. She shuddered at the thought.

What if he did kill Bobby on purpose as she envisioned? There was no proof, only her own intuition. He is a dangerous man either way.

She proceeded, waving at a few people, calling out, “See you later at the bar?” There were plenty of nods, smiles and thumbs up. Saturday night was party night without fail. The bar would be teeming with gypsies and drifters, with seasonal workers and a few townies added to the mix. Some could be counted on to bring their instruments, providing a lively impromptu concert and dance show. The bar owners loved it. They didn’t have to pay a band and they made their money for the week, as long as there were no big fights. Gervais always turned up late, after midnight; once the midway closed up. Normally she would be leaving as before or as he arrived, but tonight she would stay a bit later for the sake of her strategy.

I hope you enjoyed this short sampling.

Lesley Fletcher is a writer (freelance, books, content, lyrics,stage plays) as well as a visual artist specializing in monoprinting. To learn more about her please visit her website at http://www.LesleyFletcher.com and to view more of her books and covers for friends here is her Amazon Author Page.

5 thoughts on “A Glimpse at Crystal Ball Persuasion”

A sample of interior images in “5 Pillars of the Gypsy”

Linking Up is Easy !